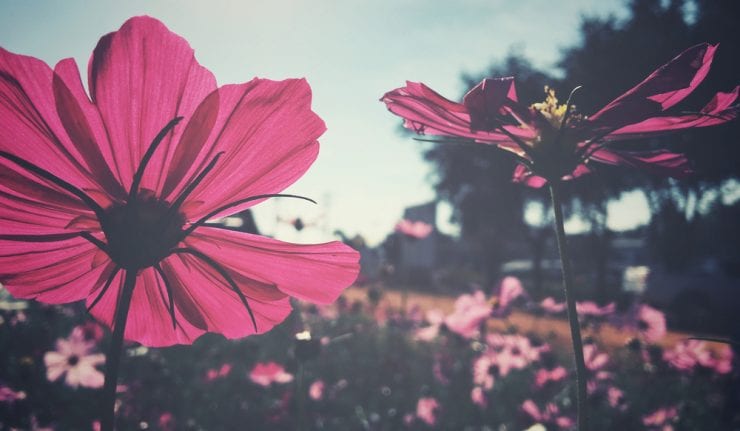 The major indices once again reached new all-time highs this week, and stocks are enjoying a historic winning streak fueled by solid earnings from market-leading stocks, the perceived benefits of tax reform and “FOMO” (Fear Of Missing Out).

The S&P 500 has increased in 14 of the last 16 trading days and now sits at 2,860, after blasting through the 2,800-level last week. The Nasdaq is approaching the 7,500 level quickly, as the tech-heavy index is on a torrid run. The Russell 2000 small caps are also participating in the rally, as they made a nice push to new highs above the 1,600 level.

However, on a more worrisome note, the S&P 500 Volatility Index (VIX) has also been rising and spiked to a peak of 11.88 this past week. While this number is below the high point of around 12.70 from mid-January, the VIX held above both its 50- and 200-day moving averages yesterday. At this point, I’m still slightly cautious and any negative headline of significance could trigger some well-deserved profit taking.

Elsewhere in the market, crude oil is continuing its advance after breaking through the $60/barrel level at the start of the year. The price now is sitting just above the $66 level despite a report from the American Petroleum Institute (API) this week showing that supplies of crude oil in the United States rose by 2.8 million barrels last week versus an expected drawdown of 1.6 million barrels. The weakness in the U.S. dollar, geopolitical tensions and a more disciplined OPEC (Organization of the Petroleum Exporting Countries) have contributed to the rise in oil prices lately.

As far as fourth-quarter earnings season is concerned, more than three-quarters of the S&P 500 companies that have reported so far have topped earnings estimates. Fourth-quarter reports will also give investors their first look at the potential effects of the tax cuts passed by Republicans. It is still early in the earnings season, but sales pipeline projections for Q1 are showing an improvement,

Forward guidance is critical for Wall Street as the market looks ahead to 2018 earnings and the effects of the tax bill. Stocks have been rallying since mid-December on expectations of a flow-through of tax benefits, which will not be fully understood for a while. However, the most recent data suggest that corporate revenues and earnings will top most investors’ expectations.

Some further signs which support a bullish view of Q4 results and Q1 guidance are:

The current mix of healthy economic growth, tame inflation, low interest rates and business-friendly tax cuts serves investors well in a stock market environment that is relatively expensive, but not yet in bubble territory. If we pick up on signals of slowing growth, a quickening of inflation and/or rising rates, then it would be prudent to tighten trailing stops or just take profits outright. Until then, the trend is our best friend.

One of the quintessential spaces within the broader tech sector, and one that has an incredibly promising future, is semiconductor equipment companies. These companies provide the fabrication equipment for all the chipmakers that are racing to bring first-to-market semiconductors to serve all the various markets that are undergoing transformational change.

The semiconductor equipment sector actually is a remarkably small field. For 2016, the total sales for the sector were $31.8 billion, with the top 10 companies accounting for $26 billion, or 82%, of total global revenues. As you can see in the chart below, the biggest of these semiconductor equipment companies by sales is Applied Materials (AMAT). In my opinion, AMAT is also perhaps the best-positioned of all the major players here.

AMAT shares trade at a very low multiple of forward earnings because the business has historically been cyclical, with the demand for technology-driven products being inconsistent and trend-driven. This risk is now well mitigated by a diversified set of demand drivers within the business and a longer-term trend in technology adoption. Additionally, tax reform should encourage businesses to make investments in improving their technological infrastructure, which, in turn, will drive growth in Applied Materials’ largest business sectors.

My technical analysis is forecasting nothing short of a robust next six months for Applied Materials. In a market where investors are searching hard for high growth and low volatility at a reasonable price, they need not look any further than AMAT. The stock has doubled in value over the past 18 months and has been consolidating those gains during the month of January, doing so near its all-time high of $60.89.

Currently trading at just under $57, the company will report Q4 2017 earnings on Feb. 21. According to Zacks Investment Research, based on nine analysts’ forecasts, the consensus earnings per share (EPS) forecast for the quarter is $0.97.

By contrast, the reported EPS for the same quarter last year was $0.67. This would represent year-over-year earnings growth of 44%. For 2018, the analyst community is expecting the company to earn $4.10-$4.40 per share.

Any time an investor can buy 44% annual growth trading at a forward price/earnings (P/E) of 13x, they have a serious investment proposition to consider. While many stocks are technically extended, shares of AMAT sit just above the 20-day and 50-day moving averages and are registering positive money flow.

My technical work is predicting a move to $66 in a flat world. However, the stock could easily clear $70 if the rally maintains its primary uptrend, a view that I find to be supported by economic fundamentals. If I am correct in this forecast, we can look forward to AMAT adding 23% to its current stock valuation over the next few months. With AMAT testing its 20-day moving average, I believe the current valuations make for an excellent entry point. 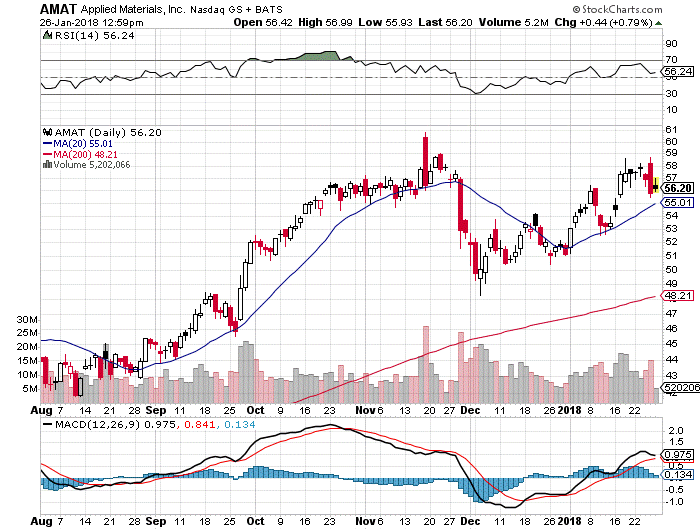 Applied Materials is one of my go-to stocks for my swing-trading service Quick Income Trader. In this service, I typically advise buying a stock on a pullback, and then present subscribers with two bullish plays on the position in the forms of a naked put option and a covered call option. The goal is to be in the trade for less than 60 days, with target gains of 10-15% for the covered call trades and 50-90% for the naked put trades. We’ve been on a serious winning streak of late, proving that one can leverage a bull market with the right strategies in the right stocks. To find out more about how to trade AMAT and other leading tech stocks, I invite you to check out Quick Income Trader by clicking here.

The media seems to be screaming about stocks having reached “bubble” valuations, but this is simply not the case. It is still winter and there are many great stocks, such as Applied Materials, that will be coming up smelling like roses throughout the spring season and beyond; it just takes a quantifiable system to recognize those special stocks with a terrific six-month outlook. To that point, Quick Income Trader has the system and the best picks for 2018.

share on:
Exclusive  Cryptocurrency Fraud: How to Protect Your Investment