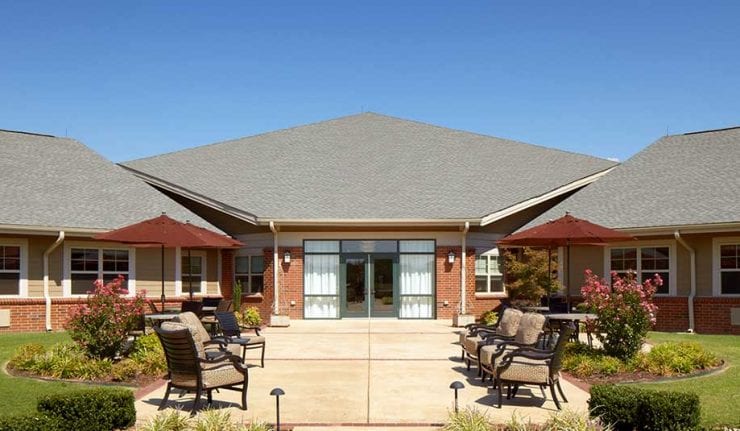 Despite the economy growing more strongly than it has in several years, Omega Healthcare’s management has been trying to guide the REIT through credit challenges incurred by a handful of its top 20 rent-paying operators. Even though REITs traditionally become less appealing to investors when interest rates rise, Omega Healthcare has demographics on its side as the aging “baby boomer” population, composed of those born between 1946 and 1964, increasingly will need the skilled nursing and assisted living facilities that the company offers through its roughly 1,000 properties.

I asked a key Omega Healthcare executive what caused his company to incur a financial slump at a time when economic growth has been on the rise.

“Our operators have been facing slow but steady revenue headwinds for a few years now as migration to Medicare Advantage has reduced reimbursement and length of stay,” said Matthew Gourmand, Omega Healthcare’s senior vice president of investor relations. “Recently, the very economic strength you refer to has resulted in higher wage cost inflation which has compounded the top-line pressures. While these headwinds are slowing and demographics are beginning to provide a tailwind, it might not be reflected in our stock until investors see these improvements.”

Favorable demographic trends for health care REITs are supported by the Census Bureau’s projection that the baby-boomer population will total 61.3 million in 2029, when the youngest in that cohort reach age 65. If those born before 1946 are included, people age 65 and older in 2029 will total 71.4 million, or 20 percent of the U.S. population, compared to just under 14 percent in 2012.

Based on significant industry analysis, Omega Healthcare found the use of skilled nursing facilities begins to increase more meaningfully at 75 years old and “accelerates each year thereafter,” Gourmand responded to a question I posed about the effect of baby boomers.

“The first of the baby boomers turned 75 in 2015 and so we are at the beginning of a 20-year tailwind of favorable aging demographics for our industry,” Gourmand added.

Despite that potential growth in demand, Omega Healthcare’s latest quarterly and annual results announced on Feb. 13 showed reduced earnings and revenues due largely to net asset sales that left fewer properties in OHI’s portfolio to produce rent. However, the REIT’s management plans to redeploy the proceeds from these asset sales in 2018 as part of its strategic asset repositioning, so the company’s performance may improve by the end of the year.

For the three-month period ended December 31, 2017, the REIT’s adjusted funds from operation (AFFO) dipped to $163.7 million, or $0.79 per common share, compared to $180.4 million, or $0.88 per common share, for the same period in 2016. AFFO, a main metric of financial performance used by investors and analysts for the industry, factors in recurring capital expenditures required to maintain the quality of a REIT’s underlying assets.

Dr. Mark Skousen, who has recommended Omega Healthcare profitably to subscribers of his Forecasts & Strategies investment newsletter for years, recently chose to add the stock and related call options to the portfolios of his Five Star Trader and High-Income Alert trading services. Skousen wrote in his March 2018 Forecasts & Strategies newsletter that the REIT’s decline in fourth-quarter 2017 performance and its plans to hold the line on further dividend hikes did not shake his confidence in the company’s prospects.

Omega Healthcare CEO Taylor Pickett announced on Feb. 13 that the company’s most recent boost in its dividend to 66 cents a share likely would be the last one this year due to its strategic repositioning that will limit its growth in 2018. However, Pickett added the REIT should be able to cover its planned payout and sustain its current quarterly dividend.

“We have assets on which we are not currently receiving rent,” Gourmand told me. “Once we transition these assets and begin receiving rents, our dividend coverage will further improve.”

The following chart shows OHI falling in recent months. With the stock’s 10% dividend yield, income seekers will be paid if they are willing to wait for OHI’s share price to grow. 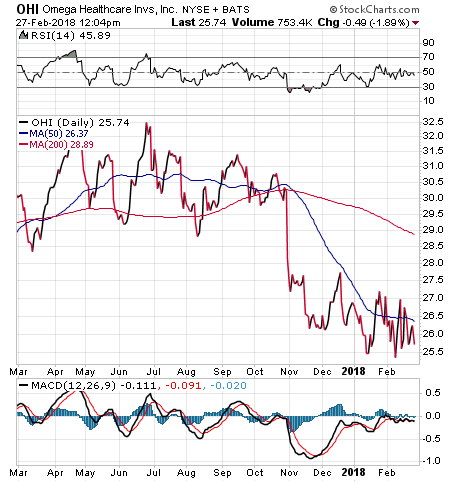 Aside from Omega Healthcare’s core business of financing and providing capital to U.S. and U.K. skilled nursing facilities and, to a lesser extent, assisted living facilities, its clients also include independent living facilities and rehabilitation and acute care facilities. Its investment portfolio consists of secured mortgages and coveted “triple-net” leases, in which tenants pay all property-related expenses.

Omega Healthcare Temporarily under the Weather?

“While the operator environment remains somewhat challenging, as things stand today, we believe our operators will weather this with limited incremental credit issues,” Gourmand said.

When I asked about the risk that an Omega Healthcare creditor, Preferred Care, which filed for bankruptcy-court protection last November, may abrogate its contracts to restructure debt, Gourmand replied that his company controls the properties used by its operators.

“While we will not discuss specific operators, we have ownership rights to our properties and therefore we have the right to retain these properties within a bankruptcy filing,” Gourmand said. “While an operator might be able to abrogate the lease contract, we can transition these assets to another operator and realize the rental income on those assets.”

For investors willing to withstand current and future headwinds buffeting the REIT, the 10 percent dividend yield of Omega Healthcare and its potential for a turnaround could become an elixir to produce a healthy investment.