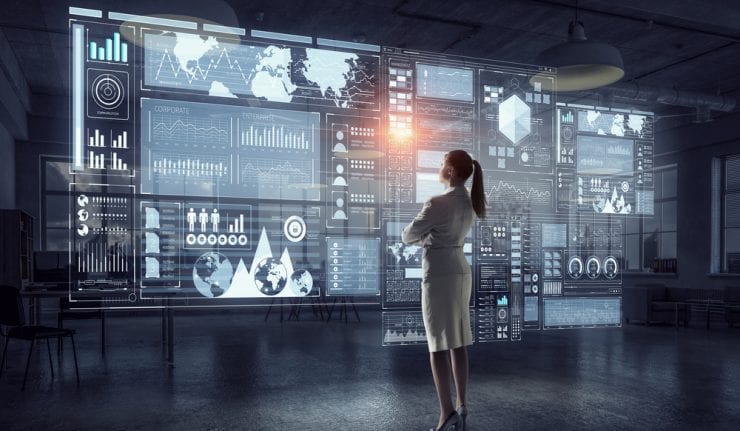 Cisco Systems Inc. (NASDAQ:CSCO) shook off several days of recent market selling by soaring 3.87 percent on Monday, March 26, to reach $44.06 at the close. However, the current market volatility forced Cisco to give back most of that gain the following day, when it closed at $42.68.

While no stock is immune to the ongoing market turbulence, Cisco is still attractive, as a technology company that pays a dividend with a yield of nearly 3 percent. That dividend helps to limit its vulnerability to nerve-wracking market drops.

Many technology stocks shun paying dividends to put as much money as possible toward future growth, but Cisco is a proven network technology giant that has bought 16 companies in the past two years, resumed growing revenues and received a 12-month price target hike to $54 from Goldman Sachs on March 22. 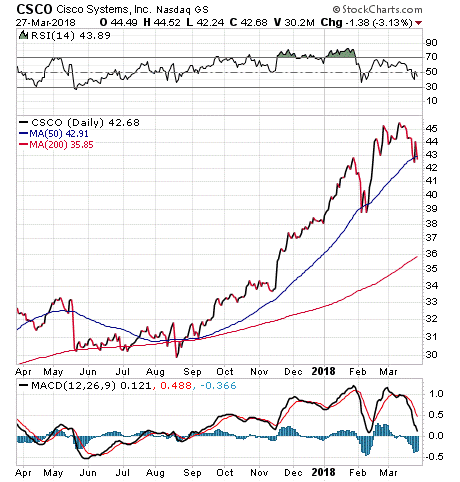 Investors who are concerned about the recent sell-off in technology stocks should remain vigilant in watching the market, but certainly not panic. Part of the cause of the weakness in technology stocks earlier in March stemmed from a controversy in Facebook (NASDAQ:FB). The company provided personnel data from 50 million of the social media company’s users to Cambridge Analytica, which used the information to help Donald Trump’s presidential campaign.

As market volatility rises, Cisco offers investors a “relatively defensive” technology sector stock, wrote Rod Hall, a technology analyst with Goldman Sachs. Cisco serves “healthy and improving” markets, which combined with renewed revenue growth and other positive financial signs to lead Goldman Sachs to add the stock to its “Americas Conviction List” on March 22, when Hall boosted his price target on the company from $51 to $54.

Exclusive  Play the Winter of 2014 with a 6.9 Percent Yield to Boot

Cisco’s operating margins, free cash flow yield and dividend yield all are above the medians of its peers. In addition, Goldman Sachs’ upgrade noted that it had raised its free cash flow forecasts for Cisco to $14 billion and $14.7 billion in 2018 and 2019, respectively, compared to its previous estimates of $11.9 billion and $13 billion.

Another plus for Cisco,  Hall wrote, is that the company is expected to “deliver significant returns” to its shareholders due to the $1.5 billion Tax Cuts and Jobs Act passed by Congress and signed into law by President Trump in December 2017. Cisco already has announced a $25 billion boost in its stock repurchase authorization that will take place during the next six to eight quarters.

For dividend lovers, Cisco has raised its payout six consecutive years and recently hiked its dividend payout ratio to nearly 50 percent. As a result of that move, Goldman Sachs is projecting that Cisco will return more than 100 percent of its “already attractive” free cash flow yield of 6-7 percent in the next two years.

In addition, as Cisco’s gross margins expand at the same time as revenue returns to growth, Goldman Sachs is forecasting earnings per share (EPS) and dividends to achieve double-digit-percentage gains.

Another fan of Cisco, despite the market’s fluctuations, is Bryan Perry, who recommended the stock Friday afternoon, March 23, in his Hi-Tech Trader advisory service. Perry advised that the stock scored an A-rating for timeliness and an 88% probability rating for turning into a successful trade, according to the artificial intelligence (AI) system he uses.

The market is particularly volatile right now with President Trump attempting to use the launch of tariffs as an apparent way to bring trading partners to the negotiating table. Perry has said that President Trump seems intent on using tariffs to sway recalcitrant foreign governments to create a more even trading climate for American companies that operate internationally.

The March 26 advance of the markets and technology stocks such as Cisco showed that the Federal Trade Commission’s plan to investigate whether Facebook violated a 2011 consent decree with the U.S. government has been factored into share prices. U.K. officials also are investigating Facebook, so that company’s shares could fall further in the days and weeks ahead, depending on the probe’s outcome.

Meanwhile, Perry viewed Cisco as a technology stock that should avoid any lingering fallout from the Facebook controversy. He wrote to his Cash Machine advisory service subscribers that he expects the market to “rally strongly” in the upcoming first-quarter earnings season.

One more fan of Cisco is Dr. Mark Skousen, who recommended it in his Forecasts & Strategies advisory service in July and has seen the stock soar more than 35% percent since then. Skousen affirmed his recommendation in the April issue of his monthly investment newsletter.

Despite the market’s gyrations amid tariffs and resulting trade talks, good businesses that pay enticing dividends should weather the fallout and offer upside when the uncertainty subsides. Cisco appears to be one of the safest technology stocks available for investors who still want to keep a stake in that sector.

P.S. To learn about the same kind of artificial intelligence-based trading systems developed by the giant hedge funds and investment banks, click here for details about a free AI Wealth Summit, on Wednesday, March 28, when Bryan Perry will introduce you to this highly profitable breakthrough in stock trading. 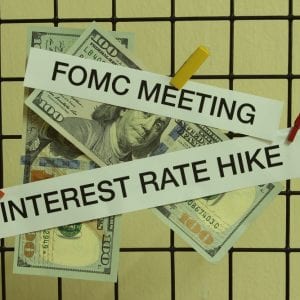