Is Water More Precious than Gold?

Water is one of the most precious of resources, and it continues to be the most mispriced.

All of us can live without gold or oil — but we can’t get very far without water. Yet while trillions are invested in finding and processing gold and oil for the markets, the water market is faced with far less than what is needed. And it’s beginning to be noticed.

The U.S. Environmental Protection Agency (EPA) continues to survey the quality of U.S. municipal water, and the results are not good.

The EPA has identified that 49 million Americans are forced to drink water that is in violation of at least part of current EPA drinking-water standards. That situation means bacteria, mercury and other contaminants have been found in water flowing through the pipes and taps of cities around the nation.

But it gets worse as you go further into the EPA’s recent data. More than 20% of Americans — which means some 62-plus million people — are forced to consume water from municipal systems that currently would be in violation of the Safe Drinking Water Act — meaning that levels of contaminants are so high that the water really should not be consumed and, if anything, should be filtered and boiled.

Moreover, in a separate study analyzing water contaminated by the cancer-causing chemical Chomium-6, 31 of the 35 water systems studied had dangerous levels of this deadly containment in their water supplies.

Now, if this was a resource problem such as gasoline shortages, we’d have protest marches going on around the nation, as consumers would be feeling the pinch in higher prices at the pump.

But the nation’s water systems’ troubles just don’t show up in an immediate and easily measured way. And we don’t see supplies cut off or price spikes, so too many Americans just don’t see the impact of the trouble until it’s too late.

Imagine if the EPA, along with other regulatory agencies, told utilities to shut down water services that were in violation of safe and clean water standards? We’d see riots and folks screaming for action.

But we don’t. Where water services still have high lead, mercury and bacterial contamination in local water supplies, the taps keep flowing and little to nothing is getting done.

Who knows how much harm is faced by our families and friends — because we don’t treat water as a valuable and market-priced resource.

Now, that said, there are a growing number of political leaders who are focused on increasing investment to improve U.S. water systems to be at least passable in quality. And just maybe, the folks over at the EPA just might begin to do their job and enforce the current rules on clean water.

And to make the nation’s water systems actually clean enough to drink from, it’s going to take a collection of products from filters to components, along with pipe, to rebuild the systems and actually clean up the water.

One company that should continue to be a beneficiary of the move to produce cleaner water for U.S. homes is St. Louis-based Aegion (AEGN). This company specializes in providing both new and repair pipe systems for water and water treatment services, as well as products for other infrastructure assets not just in the United States, but also increasingly in Asia and parts of Europe.

Aegion is beginning to be noticed by the markets, as the chart below indicates. But priced at a discount to sales and at a small premium to assets, the stock is still a bargain. 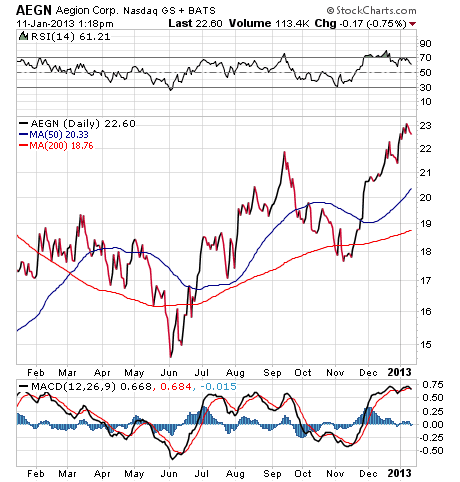