Markets are Rattled as the Fed Sends an Inflation Warning

Most investors are keenly aware that the market hates uncertainty, and they understand why the indices buckle when there is a lack of information to provide clarity.

Last week’s Federal Open Market Committee (FOMC) meeting provided what most thought was a great dose of certainty via the Fed’s policy statement that, at first, gave the bulls the ammunition they needed to push the market higher. The Fed emerged from its two-day FOMC meeting with a few changes in policy and an updated economic outlook.

The Fed is going to continue its quantitative easing of $120 billion per month, consisting of $80 billion in Treasury securities and $40 billion in mortgage-backed securities. The Fed is also going to maintain its 0% interest rate policy through 2023, which has been pulled forward from 2024, moving up the date from which it plans to raise key short-term interest rates.

The Fed also raised its forecast for real gross domestic product (GDP) growth from 6.5% to 7.0% and, most importantly, raised its inflation forecast for 2021 from 2.4% to 3.4%. The Fed has been working toward modest inflation of 2.0%-plus for years and, with the help of a pandemic-related set of commodity bottlenecks, largely has achieved or approached that target. Regardless of what was initially received as an accommodative and transparent message, the market’s reaction got progressively negative as last week ended.

No doubt, the week ahead is technically important for the market. On Friday, the S&P 500 and Russell 2000 also fell below their 50-day averages, while the Dow fell to its lowest point since April 1. Per the chart of the S&P 500 SPDR (SPY) below, there have been several instances when there has been a technical breach of the 50-day line. 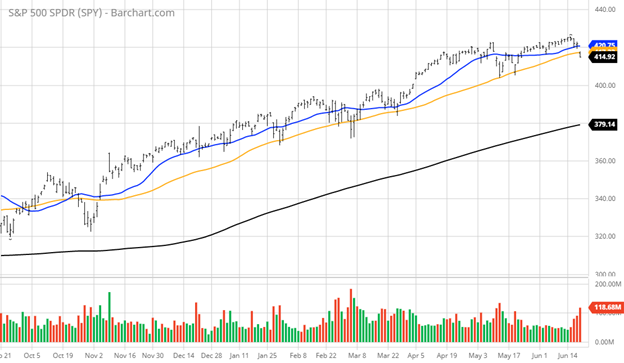 Each time, the market has righted itself and resumed its primary uptrend. I suspect this time around will be no different. High levels of liquidity, stock buybacks, mergers and acquisitions (M&A) activity, improving global COVID-19 data, solid economic data and accelerating sales and earnings should limit the risk of a something more than a pull back.

With that said, sometimes logic and rational thinking temporarily escape the trading landscape — when “the market has it wrong.” And sometimes it does, especially when it gets suddenly confused. St. Louis Fed President Bullard made some pre-market comments, going against the Fed’s official policy statement released Wednesday, that caught Wall Street flatfooted and totally confused.

Investor sentiment turned sharply negative after Bullard told CNBC that he was one of the seven FOMC officials on Wednesday that expected a rate hike next year and that the Fed shouldn’t be involved in mortgage-backed securities. Mr. Bullard was previously viewed as one of the more dovish Fed members.

For a non-voting member of the Fed to throw that curveball at the market on a quadruple-witching-options-expiration Friday in what is already a seasonally weak time of the year felt like a sucker punch that triggered selling across the board.

Value and cyclical stocks were being dumped from the opening bell by investors in an environment where inflation/growth rates could be peaking as the economy moves past the initial reopening phase and the Fed starts to sound less dovish. Big-cap tech held steady as money rushed back into the FAANG stocks of Facebook (NASDAQ:FB), Amazon.com (NASDAQ:AMZN), Apple Inc. (NASDAQ:AAPL), Netflix, Inc. (NASDAQ:NFLX) and Google’s parent Alphabet (NASDAQ:GOOGL), plus a few big software stocks, but no sector finished the week unscathed. 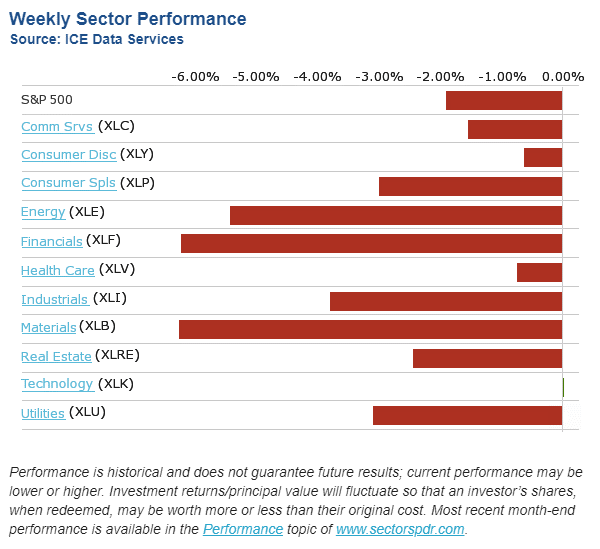 Adding to the confusion, bonds staged a strong rally, pushing the 10-year Treasury note yield down to 1.45%. Even more pronounced was the drop in yield in the 30-year Treasury bond down to 2.02%. Some of this pressure was simply a flight to safety as the algorithms were tripping sell programs, but the dramatic move lower in yield again confused traders and investors about such a counter-intuitive move if the economy is truly picking up speed as the Fed’s narrative suggests. 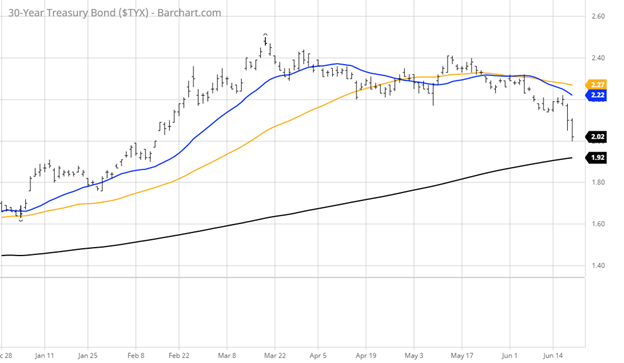 This week’s economic data should help provide some clarity on the recent economic activity from both businesses and consumers, as well as offer updated readings on the housing market and the manufacturing and services sectors. Existing home sales and new home sales for May will be released on Wednesday. Manufacturing and services purchasing managers’ indexes are also due out on Wednesday. Thursday’s data releases will include revised Q1 gross domestic product, while Friday’s data will feature consumer spending for May and consumer sentiment for June.

Ultimately, the economic data and quarterly results are what the market cares about the most. In both cases, the numbers should be quite bullish for the market.

Herky-jerky markets induced by a Fed that is not singing off the same sheet of music make for a nervous investing landscape. But bear in mind that any future moves will be nominal and well telegraphed. Considering the level where the S&P is trading at, a lot of fuss was made last week over a 2.3% decline.

Each time the market has experienced a hissy fit, such as the present, it has been a timely opportunity to buy the best dividend growth stocks that temporarily go on sale. With bond yields coming back down, the attractiveness of blue-chip dividend growth just became a more golden investment proposition for the second half of 2021.

Stock selection is also at a higher premium than it was a month ago, and the best dividend stocks have given investors a very brief moment to buy them on sale.