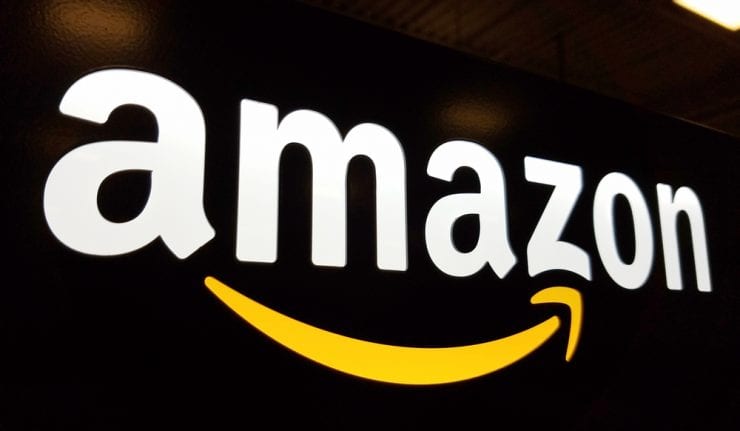 Amazon.com, Inc. (NASDAQ:AMZN) reported strong holiday-season sales on Wednesday, Dec. 26, that resulted in a “record” number of orders. The company also announced a list of “successful products” during the holiday-selling season that showed its devices were “very popular” gifts with millions more of them sold than during the same period last year, according to D.A. Davidson & Co., a boutique investment firm.

Use of these devices also rose “significantly,” with shopping on Alexa specifically increasing more than three-fold compared to last year, observed Tom Forte, managing director and a senior ecommerce research analyst at D.A. Davidson & Co. He predicted voice-related products will play an “important role” in the future of retail and views Alexa as one of the most underappreciated capabilities in Amazon’s portfolio.

D.A. Davison’s Forte reiterated his “buy rating” and $2,450 price target, which would be a 65.8 percent jump from Amazon’s stock price of $1,478.02 at the end of trading on Friday, Dec. 28, based on the investment firm’s discounted cash flow analysis. That price target includes Forte’s long-term adjusted earnings before interest, taxes, depreciation and amortization (EBITDA) margin of 22.0 percent, compared to 11.1 percent in 2017.

While much of the focus for Amazon’s stock has been on its cloud computing business, which is the company’s most profitable and fastest-growing segment, its retail business remains vibrant and keeps reaching new milestones, Forte wrote in a recent research note. Plus, the Amazon Prime service also showed strong growth with tens of millions of new users and one billion orders shipped, Forte added.

Even though some of the new Amazon Prime users were added on a free trial basis, Forte described the new additions as a leading indicator of future growth. His reasoning is that Prime users tend to be especially loyal and order more frequently than non-Prime customers.

Another potential boost for Amazon’s sales could come from cutting the fees it charges third-party resellers that could enhance its competitiveness against other marketplaces and attract more “high quality” sellers that would improve overall product offerings to its customers, Forte wrote in his research note. Third-party retail and advertising are two of the most likely sources of future price appreciation and profit generation for Amazon, he added.

Optimism about Amazon’s third-party retail sales is warranted, based on its share of total paid units reaching 53 percent in the third quarter of 2018, which Forte projects could climb to 75 percent over time. These efforts should boost profit margin due to the “much higher gross margins” for third-party than first-party sales, he added.

“Lastly, we note it may take time for investors to adjust to the new Amazon, with higher profits but slower sales,” Forte wrote.

An example of this new Amazon trend toward higher profits is that earnings per share (EPS) was much more than projected for second-quarter and third-quarter 2018, but sales slowed and put pressure on the stock price, Forte explained. On a near-term basis, Forte forecast that a combination of “strong holiday sales” in the face of reduced expectations would boost Amazon’s stock price.

Barron’s described Amazon as possibly the “best Black Friday bargain” in an article on Nov. 23, when the stock closed trading at $1,502.06, before it slipped 1.6 percent to $1,478.02 by the market’s close on Friday, Dec. 28. Amazon is among the stocks that recently showed signs of recovering after a market pullback in the fourth quarter, as reflected by its $16.38, or 1.12 percent gain, on Dec. 28. 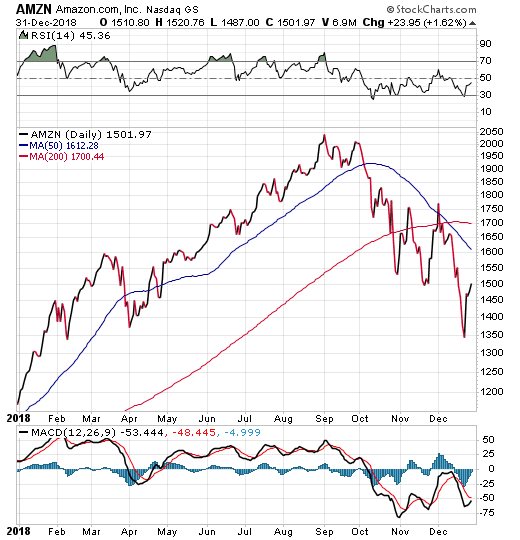 “One of the reasons for AMZN’s big decline in Q4 is because it was so widely owned, and did so well, over the past several years,” said Jim Woods, editor of Successful Investing, Intelligence Report and Bullseye Stock Trader. “When the bulls step back into this market, great companies that also have been beaten-up, i.e. AMZN, will be the first ones to storm back.”

Bob Carlson, who heads the Retirement Watch advisory service, said the “crown jewel” of Amazon, which many investors underestimate, is its Web Services division (AWS), which also is known as Amazon Web Services.

“It’s widely used by many companies, even those who compete with Amazon in other areas, Carlson said. “Growth in AWS might slow, because the economy is slowing. But AWS is likely to continue to increase market share, and slower growth is already priced into the stock.”

Hilary Kramer, a seasoned Wall Street professional who leads the Turbo Trader and Inner Circle advisory services, said the online retailer trading at 52 times next year’s earnings per share estimate indicates Amazon’s stock price is “cheaper” than it has ever been, so a near-term rally is possible.

“However, it is still an expensive stock and, with growth starting to slow, returns will be limited by the likely P/E contraction that will take place over the next several years as the company matures,” Kramer said.

But swing traders still can make “decent money” on a rebound to $2,000 a share, up 35.3 percent from Amazon’s closing price on Dec. 28, Kramer said. The challenge is where Amazon would go from there, since revenue growth from existing businesses is slowing, she added.

“Alexa is getting traction in the household, but where it fits into the overall strategy remains a little nebulous,” Kramer continued. “Kindle was a competition killer. What does Alexa do for Amazon right now?”

“In theory, Amazon becomes the commercial face of the Internet of Things and Alexa is its voice, talking to consumers and routing orders to a network of favored merchants. That’s worth a growth premium because the addressable market there is vast, but it’s an argument similar to what we hear around Apple. If you believe Jeff Bezos, the company’s founder and chief executive officer, is still innovating, Amazon has tricks left to dazzle us. Otherwise, returns will be limited as the company matures.”

Amazon continually seems to be seeking to unlock the value of its acquisition of Whole Foods Market for $13.7 billion in August 2017. The plan now is for Amazon to build and grow the number of Whole Foods stories and distribution centers in various regions of the country to allow the delivery of food ordered through Amazon Prime within 30 minutes, one hour or two hours.

It may be a stretch to describe a stock with a current P/E valuation above 90 as a relative bargain for investors but Amazon has been a high-growth company for years and has pulled back dramatically after briefly reaching a market capitalization of $1 trillion on Sept. 4. Investors who believe in the entrepreneurial skill of Amazon’s founder Bezos and the company’s knack of finding new ways to fuel its growth, while also boosting its margins, may be enticed to buy the shares in pursuit of a double-digit-percentage gain.

previous article
The One Stock to Buy in the Market Correction
next article
Resolutions Are Wishes, Take Action Instead