Austrian Economics in the Bible

I’ve enjoyed watching parts of “The Bible,” the History Channel’s series on the Bible from the story of Adam and Eve to the resurrection of Jesus Christ (the final episode is airing Easter Sunday). It reminded me of a couple of parables of Jesus that I associate with Austrian economics.

The first is the parable of the unfinished tower. Jesus tells the story of a man who intended to build a tower. Does he not “sit down first and count the cost, to see if he has sufficient funds to pay for it?” He raises the possibility of failure if he starts building the foundation, only to find out that he doesn’t have the necessary funds to finish it, and his neighbors and business associates “mock him,” saying, “This man began to build and was not able to finish.” (Luke 14:28-30)

Sound familiar? Millions of Americans were duped by the federal government and the Federal Reserve into buying homes they could not afford and failed to count the cost. When the financial crisis of 2008 hit, they could not keep up the monthly mortgage payments and defaulted.

When I travel to Detroit and other cities suffering from the Great Recession, I often see houses and commercial buildings sitting empty. I have witnessed the same in foreign lands such as the Bahamas or Mexico.

The Wheat and the Tares

The second parable is found in Matthew 13, the parable of the wheat and the tares (weeds). Jesus tells the story of a wheat farmer whose servants plant his crop. Then at night, while everyone is asleep, an “enemy” comes and plants “tares” or seeds that will only grow into weeds. At first, when the plants are young, the servants are happy to discover that the farm will enjoy a bumper crop.

Only a few months later do they discover that half of the crop is weeds. In a panic, they go to the owner and ask what they should do. The farmer warns them not to pull up the weeds prematurely, “lest while you gather up the tares, you root up the wheat with them.” He instructs them to wait until the time of the harvest. A few months later, the servants first pull up the tares (weeds) and burn them, then gather up the remaining wheat and store it in the barn.

From an Austrian perspective, the parable demonstrates the difference between genuine prosperity (wheat) and artificial prosperity (tares or weeds). The private sector creates genuine prosperity through hard work, thrift, productivity and technological advance. Who is the enemy who plants weeds? The chairman of the Federal Reserve! The Fed creates artificial stimulus through easy money. The easy money at first creates the illusion of prosperity. But it turns out to be artificial and cannot last. When the harvest comes, the excesses of the economy prove to be unsustainable and must collapse into recession (the burning).

In the parable of the wheat farmer, the tares/weeds harm the wheat crop by using up valuable ingredients in the soil. The end result is that the wheat crop is less than what it would be. The same is true of an artificial stimulus of the economy due to easy money. It keeps the genuine economy from growing as fast as it should. The recovery drags on.

You Blew It! The Cost of a Free Lunch (Food Stamps)

“The commitments we make to each other — through Medicare, and Medicaid, and Social Security — these things do not sap our initiative; they strengthen us. They do not make us a nation of takers; they free us to take the risks that make this country great.”
— President Barack Obama, Inaugural Address 2013

The Wall Street Journal had a cover story today, “Use of Food Stamps Swells Even as Economy Improves.” It’s a sad commentary on the state of benefit-corruption (takers) in America.

The fact is that a record number of Americans — 48 million Americans, or 15% of the population — are on food stamps… I’m sorry, I mean Supplemental Nutrition Assistance Program, or SNAP, the politically correct term to discourage negative attitudes about handouts or welfare.

The Department of Agriculture has encouraged people aggressively to get on food stamps. Here’s a catchy phrase they could use in their advertising, “Getting food stamps is as easy as SNAP.”

Yet it wasn’t always that way. The Welfare Reform Act of 1996 actually reduced the number of people on food stamps. But that all changed in 2008 with the financial crisis and the election of Obama. Now the government, at both the federal and state levels, has made it easier, much easier, to get food stamps with a debit card.

Who says the economy is improving? The official unemployment rate is declining, but that’s misleading if you look at the number of people on food stamps and Medicaid. The cost of these programs is going through the roof. The level of poverty is increasing significantly in this country.

It’s nothing to be proud of. And contrary to what President Obama said in his inaugural address, going on Medicare and food stamps does not strengthen us. Just ask people who are fourth-generation welfare recipients.

We are happy to announce that we are going to have a special session at this year’s FreedomFest on “Austrian Investment Strategies,” with Harry Veryser (University of Detroit-Mercy), Adrian Day (money manager) and Jeff Berwick (Dollar Vigilante). I’ll serve as the moderator. All of the participants are practical investors who will suggest ways to use Austrian economics to make investment decisions. Come join us: visit www.freedomfest.com, or call Tami Holland, 1-866/266-5101. 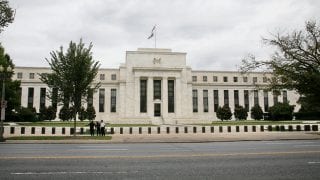