Although the Federal Reserve likes to focus its inflation algorithms on the core Personal Consumption Expenditures (PCE) Index that strips out food and energy, the headlines consumers see each day fan their outrage over food and energy prices.

According to the U.S. Department of Agriculture, food prices are up 10.8% for the 12 months ending April 30, 2022, representing the largest 12-month increase since 1980. The next Consumer Price Index (CPI) will be released this Friday, June 10, for prices during May.

This will tell us if inflation is plateauing at the retail level. Then, on Tuesday, June 14, we’ll check prices at the wholesale level with the release of the Producer Price Index (PPI) report. It’s hard to fathom the numbers improving, but the latest narrative being pushed by the financial media is that peak inflation occurred in April.

While the rate of inflation might have paused a bit in May, inflation may get more daunting during June, given the surge in diesel and gasoline prices in just the past two weeks. This has raised serious doubts as to whether refineries can keep up with summer demand. The national average for gasoline and diesel hit another all-time high over the weekend at $4.82 per gallon for gas and $5.63 per gallon for diesel.

The total for weekly inventories of crude and refined fuels is getting smaller, and the market is becoming more panicked about rising demand during the upcoming summer travel season and the risk of a hurricane or refinery shutdown that could cripple critical infrastructure, sending prices higher still.

Gas prices get most of the attention, but trains and trucks run on diesel, where the recent spike in prices will almost be guaranteed to be reflected in higher food and clothing prices, just for starters.

The news of Saudi Arabia and OPEC+ nations being willing to increase crude production to replace Russian oil supplies was initially received as bullish, as the European Union moves to a full embargo of Russian exports in support of Ukraine and takes direct action against Russian President Vladimir Putin and the Kremlin. But once the details were out, it became clear that OPEC+ will only increase production by 0.648 million barrels per day (mb/d) in July and August, a 216,000 barrel gain over their already planned hike of 0.432mb/d.

Crude oil traders were not impressed with that small increase, given the fresh demand out of China — with its reopening of Shanghai and Beijing — and the weekly Energy Information Administration (EIA) data showing that crude stockpiles in the United States fell by 5.07 million barrels for the past week. WTI crude briefly traded down to $112 per barrel and then quickly reversed higher to close out Friday’s session at $119, the highest close since the spike in March in reaction to the initial Russian invasion of Ukraine.

Adding to summer costs, the latest special blend of gasoline meant to lower emissions can drive up costs by as much as 15 cents per gallon (according to gasbuddy.com). The main concern is that these elevated conditions will last through the summer, pushing prices for everything up, as freight, delivery and logistics expenses soar. As a result, stock prices for both Walmart Inc. (WMT) and Target Corp. (TGT) tanked on news of excessively higher transportation costs, and conditions have now only worsened.

In several recent columns, I covered principles of investing in energy stocks, pinpointing where attractive dividend and distribution yields are. It is harder to find similar opportunities in the agriculture sector, places where investors can collect a fat yield in corn, wheat, soybean or other food-related commodities. There are certainly a number of stocks representing fertilizer, seed, chemicals, processors, farms and farm machinery where some decent yields can be found, but none in the spot commodities markets to speak of.

However, by utilizing a covered-call strategy, investors can participate in direct daily pricing of wheat, corn, soybean, sugar — or a combination of all four. For instance, the TEUCRIUM Funds are exchange-traded products (ETPs) that are a subset of the $5 trillion ETF market. They use derivatives, in this case futures, collateralized by Treasuries, to gain access and exposure to key commodities.

The use of these ag-related ETPs isn’t a perfect solution, but they have a high correlation to the markets they track. The most-widely traded is The Teucrium Wheat Fund (WEAT), where daily volumes average better than three million shares and have produced a 42% year-to-date (YTD) return. News over the weekend of Russia blockading 20 million tons of Ukraine wheat exports from its ports is just another headline that fans the flames of global food security risks and the likelihood of persistently high prices going forward. 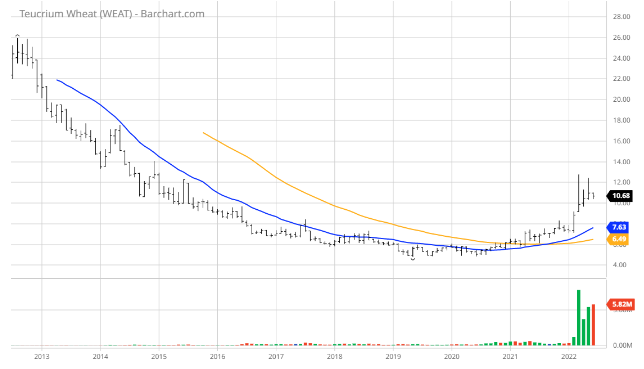 The current price of wheat is around $10.40 per bushel, trading as high as $12.75/bushel in early March and near that level again in May. Ukraine used to export 5-6 million tons per month and now use trains and trucks to move less than 10% of that, between 300,000 to 500,000 tons per month. That output possibly could reach one million tons in June. Even then, Russia is also stealing some of that wheat and routing it through Crimea to countries that don’t ask where it came from. It’s a real problem, because, as I noted, plan B uses two modes of overland transportation that depend 100% on diesel fuel.

Unlike oil prices that are within 15% of their all-time high set in mid-2008, the price of wheat is 60% off its multi-year high set in 2012, which was caused by severe drought conditions in the United States. So, wheat has room to rise.

Selling out-of-the-money covered calls on wheat, corn and soybeans is another creative way to have the winds of food inflation to your portfolio’s back. If you sell the July 15, 2022, $12 WEAT calls at $0.30 per contract, or roughly 2.8% in option premium, divided by the share price, with WEAT shares trading at $10.70, that is a nice premium for a six-week contract. If called away at $12 on July 15, this trade would generate a total return of 15% between capital appreciation and call premium collected. Imagine selling calls on these underlying commodity shares five or six times per year. Considering the macro conditions for wheat, corn and soybean, this strategy has the potential to generate double-digit-percentage returns on income alone.

Like I said, to beat record inflation, investors should consider looking at alternative assets and be creative. It might make going to the grocery store just a little less painful.