The Japanese currency sell-off took a brief timeout today as the yen reached 99.67 per U.S. dollar, almost guaranteeing the buck will hit 100 yen before the end of the month.  Since the Bank of Japan (BOJ) revealed its stimulus program last Thursday, the dollar has gained about 7 percent against Japan’s currency. Most analysts believe the yen sell-off will continue in the near future.  On the American side of this equation, U.S. economic prospects look brighter this morning, as well. Alocoa led off earnings season with an increase in quarterly profits and solid earnings, both ahead of analysts estimates.  European markets took this optimism to heart and are slightly up this morning as well.  We’ll see if the rest of corporate America follows Alcoa’s lead.

After just 17 months on the job, JC Penny (JCP) Chief Executive Officer Ron Johnson is leaving the company. In his place, JCP went back to the man who led the company from 2004-2011, Mike Ulman. Investors looking for the market’s response didn’t have to wait long as shares dropped more than 6 percent to $14.91 in after hours trading. Johnson was forced out after his aggressive strategy to remake JCPenny’s image from a discount store to one with everyday low prices had yet to take hold. In fact, this sentiment was echoed by Deborah Weinswig of Citi Investment Research, who concluded that “severe underperformance compelled the board to make a CEO change…” We’ll see if making what was old new again is the answer.

Investors looking to stay ahead of the rapidly evolving airline space can scratch one candidate off of their lists – for the next two years any way. Craig Kreeger, Virgin Atlantic Airways, LTD.’s new CEO, announced he’s outlined a two-year timetable for restoring Virgin’s good name. Shortly, he looks to freeze capacity, review staffing levels and scrutinize the company’s agreement with Delta Airlines for additional profitability — all the while, seeking to retain the U.K. airline’s appeal. And by appeal, Kreeger means the airline’s reputation for quality, cool and passenger comfort through amenities like in-flight massages, cutting-edge lounges and motorcycle pickups. Unfortunately, those same amenities helped Virgin dig a $122 million hole in fiscal 2012.  Good luck, Craig.

previous article
Daily Data Flow: Stocks up after Last Week’s Drop; Crowdfunding Growing, Bank Lending Decreasing; Grecian Banks in Need of State Help
next article
The Global Guru: Why this is a Very Strange Market… and My “Hedge Portfolio” 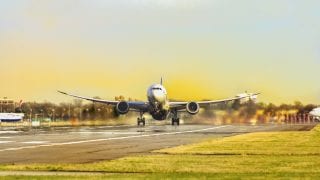 ‘Come Fly With Me’ – It’s Time To Buy The Airlines