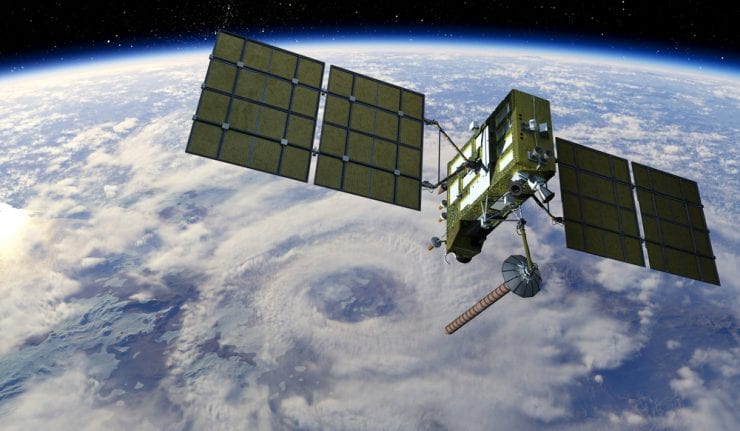 The satellite industry is heading towards consolidation, but one of the companies that should be a part of its future is EchoStar Corporation (NASDAQ: SATS), a technology stock that has been falling in price with its sector lately.

The company stands out for offering broadband services profitably, while other satellite operators have struggled mightily to do so. EchoStar also has more than $33 billion in cash to make acquisitions that would position the company for further growth under the leadership of its Chairman Charlie Ergen, a self-made billionaire who personally used to sell large, backyard satellite dishes to people in rural areas of Colorado and deliver them in the back of a pick-up truck with his wife, Candy, and business partner, Jim DeFranco.

With just $389 million in net debt at the end of 2017, EchoStar is rated as “outperform” by Raymond James & Associates, which recently raised its price target on the stock by $1 to $74. The company’s key assets are its Hughes Network Systems broadband unit, its EchoStar Satellite Services video distribution business, its stake in pay-television venture DISH Mexico and newly deployed satellites that include the EchoStar 21 launched on June 7 last year to provide advanced mobile communication services for voice and data connectivity throughout Europe. 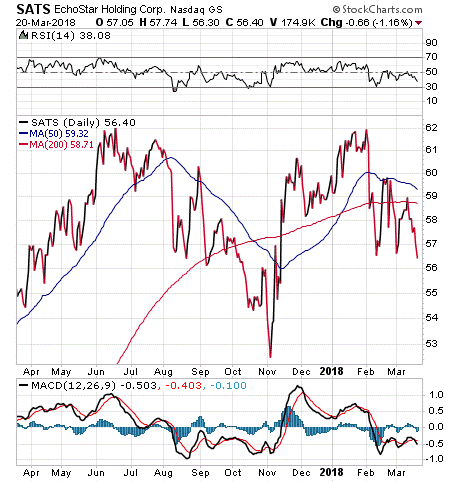 Ric Prentiss, the analyst who tracks the stock for Raymond James, wrote in a Feb. 23 research note after EchoStar’s fourth-quarter and year-end 2018 earnings call that the company’s underlying business is outperforming expectations and its balance sheet is “extremely healthy.” Headquartered in Englewood, Colorado, EchoStar operates 20-plus geosynchronous satellites that orbit 26,236 miles above the Earth to provide broadband, video and other communication  services to media and broadcast organizations, pay-TV operators, retail businesses, aerospace companies, airlines, the U.S. Department of Defense (DoD) and other federal agencies.

Echostar Is a Technology Stock Benefiting from Broadband

Earlier in my career, I covered the satellite, space, aerospace and airline industries as a beat reporter and interviewed Charlie Ergen several times, as well as spoke to him conversationally on many occasions when he was much more accessible than he is now as chairman of EchoStar and chairman and CEO of satellite TV operator DISH Network (NASDAQ: DISH). Years ago, Ergen told me in his southern drawl that the only business in which he ever lost money was broadband, and that he was determined to turn a profit in it one day.
Ergen has achieved his goal with EchoStar, which acquired satellite broadband provider Hughes and its debt for about $2 billion in 2011. The transaction gave EchoStar a technological advantage in pursuing both consumer and business broadband customers. The result is that EchoStar now is providing broadband profitably.

I interviewed Hughes Network Systems Executive Vice President Mike Cook at the Satellite 2018 conference in Washington, D.C., last week, and he told me Ergen is “making money with us” in broadband, attends the business unit’s board meetings and engages actively in strategic decisions.

Ergen, who enjoys playing poker with his friends for recreation, keeps growing his empire, despite almost always competing against bigger and better-funded rivals. Investors looking to find a winner among the satellite and space businesses available for investment could do much worse than to bet on an enterprising entrepreneur like Ergen. After DISH Network Corp. lost a bidding battle to Tokyo-based Softbank Corp. for the purchase of Sprint Nextel Corp. in 2013, Ergen started looking for his next acquisition opportunities and hasn’t stopped yet. Nor should investors expect him to do so.

Echostar Is a Technology Stock with International Growth Plans

For a man who once told me he was shy, Ergen ends up in the spotlight more than might be expected. He is taking EchoStar beyond the U.S. borders and offering satellite broadband services in Brazil and Colombia. Plans also are underway to launch services in Peru, Chile and other foreign countries, Cook told me.

“We are building the capacity to be able to connect the vast majority of the unserved and underserved population throughout the Americas,” Cook said.

EchoStar also operates in the Far East, with the Hughes business unit supplying broadband systems to the Asia/Pacific region since the early 1980s. Hughes also sells very small aperture (VSAT) equipment to retail customers in Asia, while manufacturing and shipping more than 5 million satellite terminals to customers in 100-plus countries.

Echostar Is a Technology Stock Gaining Lift from Airlines

In addition, Hughes has more than 10 years of experience in providing in-flight connectivity for commercial, government and private aircraft. The business unit’s first-generation aeronautical system uses airborne and ground equipment, as well as software, to deliver broadband services to commercial aircraft passengers around the world on carriers such as Southwest Airlines (NYSE:LUV), Icelandair, Norwegian Air Shuttle, flydubai and others.

The DOD also has provided a new growth opportunity for Ergen’s empire as exemplified by Hughes winning a contract in July 2017 for a Wideband Communications Architecture Study (WCAS) to support the military’s plan for resilient, cost-effective satellite communications. Hughes is exploring how different satellite services can address the government’s goal of obtaining enhanced data rates through wideband communications.

Investors who are worried about the market’s March 19 sell-off and the pullback in the share prices of technology companies should avoid overreacting to the high-profile controversy involving Facebook (NASDAQ: FB), which reportedly provided personnel data from 50 million of the social media company’s website users to political data firm Cambridge Analytica. The market rose the following day, even though technology stocks in general pulled back a bit further.

Echostar is a Technology Stock Hurt by Facebook Fallout

The Federal Trade Commission is expected to decide whether Facebook violated a 2011 consent decree with the U.S. government to protect the personal data of its users. U.K. government officials also are investigating Facebook, so the company’s shares could fall further in the days and weeks ahead, depending on the probe’s ultimate findings.

Meanwhile, technology stocks other than Facebook still offer value, especially for investors who thought the sector looked promising before the events of the last week. Bryan Perry, who leads the Hi-Tech Trader advisory service, said he regards the past week as the “storm before the calm.” Once the Federal Open Market Committee releases its latest statement on March 21 and likely takes a measured position on whether it will raise interest rates more than three times this year, the markets should “rally strongly” when first-quarter financial-reporting begins, he wrote today in his Cash Machine hotline.

With EchoStar closing today at $56.40, down 1.16 percent, it is well below the $74 a share price target set by Raymond James. For investors seeking value after the technology sector’s pullback in recent days, EchoStar could be a stock worth considering for possible investment. 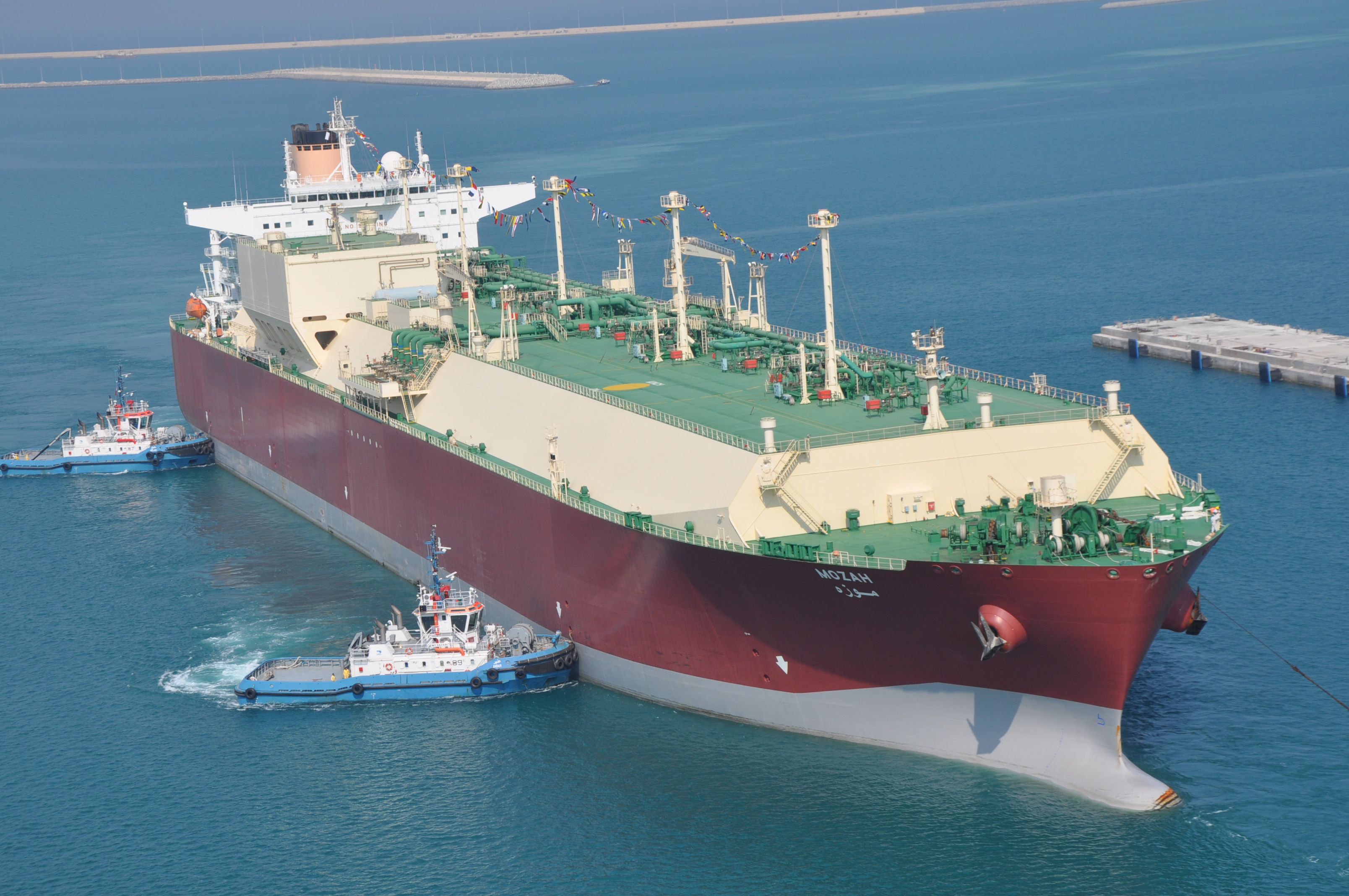 President Trump is planning to impose tariffs on many of China’s imports and will target the technology and telecom sectors.