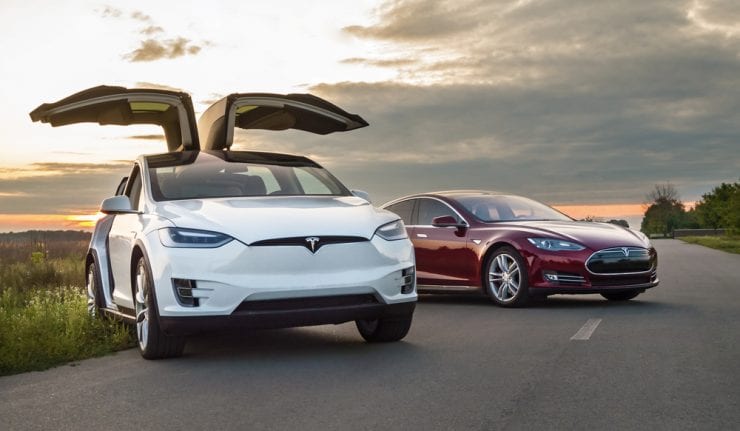 Elon Musk’s settlement with the Securities and Exchange Commission (SEC) reduces risk for Tesla Inc. (NASDAQ:TSLA) investors by keeping the electric car company’s visionary leader as its chief executive officer, despite barring him from serving as chairman for the next three years and requiring that he pay a $20 million fine.

Tesla’s stock surged 17.35 percent to $310.70 on Oct. 1 in the first trading day after Musk’s settlement was announced on Saturday, Sept. 29, as investors viewed the resolution as positive news after the SEC sued him on Thursday, Sept. 27, for “false and misleading” tweets about having “funding secured” to take the company private. The SEC initially sought to bar the 47-year-old Musk permanently from serving as an officer of any public company, but Wall Street analysts warned that the fallout for Tesla could have been steep if Musk, a co-founder of the company, was forced out.

Musk’s settlement with the SEC also requires the company to pay a $20 million fine, provide supervision of Musk’s Twitter account and to add two independent board members. The SEC sued Musk on Friday, Sept. 28, for his series of Aug. 7 tweets about taking the company private in a multi-billion transaction at $420 a share for a “substantial premium” of more than 20 percent above the company’s then-current share price.

A price of $419 a share would have been 20 percent above the stock’s Aug. 7 price, but Musk told SEC investigators he rounded it up to $420 a share, since the number 420 is associated with April 4, known in some circles as national “Weed Day.” Musk said he thought his girlfriend would find the number “funny,” even though he acknowledged it is “not a great reason” to pick a buyout price.

The regulatory body found that Musk gave the impression the “only contingency” left was to obtain shareholder approval. In truth and in fact, Musk had not even discussed, much less confirmed, key deal terms, including price, with any potential funding source, the agency stated in its lawsuit.

Tesla announced late on Friday, Aug. 24, that it had assessed its privatization prospects and preferred to stay public, despite Musk’s continuing frustration with short sellers who profit when the company’s stock price plunges.

The SEC’s lawsuit claimed that Musk violated 10(b)(5) of the Securities Exchange Act of 1934. Key elements of a 10(b)(5) violation include that any statement, such as private tweets, was “material” and made with “scienter,’ which is not just full-blown intent but includes “recklessness” that involves a danger to the market, according to my previous column about what investors should expect.

Musk’s settlement comes after questions were raised by critics about his judgement after he smoked weed and drank whiskey in a Sept. 6 podcast with comedian Joe Rogan. It was another in a string of public statements and actions by Musk that put debt-laden Tesla’s share price on a stock market roller coaster in recent months. 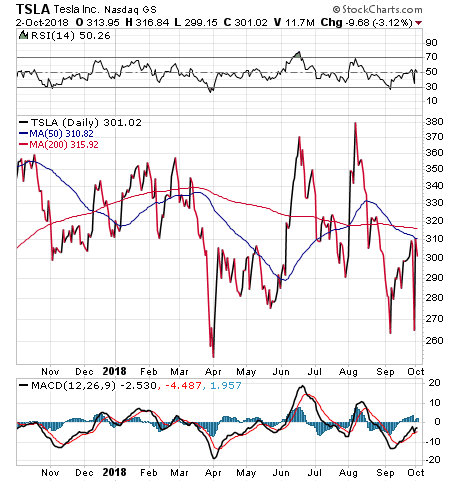 “I find it amazing how tenaciously Musk’s supporters hold on to his stock, given the troubles we’ve seen recently with Tesla,” said Dr. Mark Skousen, who heads the Forecasts & Strategies investment advisory service that profitably recommends ARK Innovation (NYSE:ARKK), which lists Tesla as its largest holding. Skousen has voiced hope ARKK would drop Tesla from its portfolio and he recently opined the auto manufacturer’s debt level is “insurmountable.” 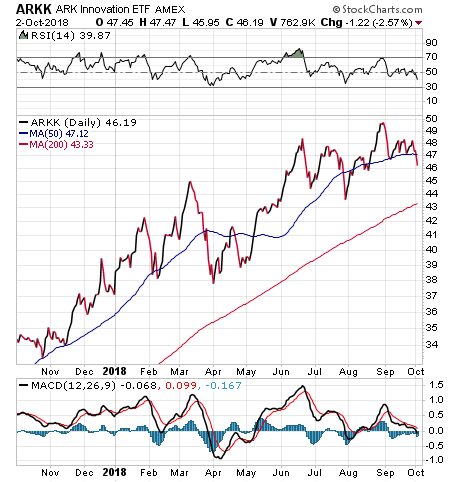 Forecasts & Strategies helped its subscribers to a 64.1 percent return in Ford Motor Co. (NYSE:F) between December 2009 and January 2011 when the vehicle manufacturer rebounded from severe financial distress, but no automobile manufacturers are among its current recommendations.

“The settlement reached was the best possible outcome for Musk, Tesla and its shareholders,” said Hilary Kramer, whose Value Authority advisory service has produced double-digit-percentage profits in its last six trades. “The fine is not draconian, and Musk remains the leader and face of the company. Having a chairman above him will hopefully restrain Musk from unwise comments going forward, and now an apparatus exists for his removal if necessary.

“This is not to say the company does not continue to face significant issues, but this is one less cloud,” said Kramer, who recently recommended the sale of Ford to subscribers of her Turbo Trader and Inner Circle advisory services.

Tesla reported on Oct 2 that it achieved unprecedented rates of production during the third quarter that closed Sept. 30. It turned out 53,239 Model 3 vehicles during that three-month period to meet its guidance and almost double its second-quarter output.

In the third quarter’s last week, Tesla produced more than 5,300 Model 3 vehicles. The company’s third-quarter production of 26,903 Model S and X cars finished slightly ahead of its second-quarter total.

Tesla acknowledged that it still needs to improve its delivery and outbound vehicle logistics but made progress in the third quarter. Another overhang stems from the ongoing trade tensions between the United States and China, which resulted in an import tariff of 40 percent on Tesla’s electric vehicles, compared to 15 percent on other imported cars in China, the company reported.

Tesla is ahead of its strategic plan for its Gigafactory’s battery production, based on some “important metrics,” according to ARK Investment Management LLC, whose ARK Innovation fund has its biggest holding in Tesla. The Gigafactory is expected to boost its capacity to 35 GWh by the end of this year, even though it initially did not project to achieve 35 GWh of battery cell production by 2020 to support production of 500,000 vehicles a year.

At 35 GWh, the Gigafactory will be two years ahead of schedule by the end of this year, furthering Musk’s forecast of producing 150 GWh per year once it is complete, ARK officials said. Cars could account for half of the capacity, with the remainder used for energy storage units for utilities and homes.

Batteries were a bottleneck for Model 3 production earlier this year. Now, production is proceeding at a record clip for the company.

Musk’s settlement gives Tesla additional oversight of its sometimes-unpredictable CEO and his occasionally controversial and imprudent tweets. With the company’s need to become profitable as soon as possible to avoid a premature return to the public markets for fresh financing on unfavorable terms, the increased discipline can come none too soon for investors who believe in Musk’s vision but would prefer he produce good rather than bad headlines for the company.